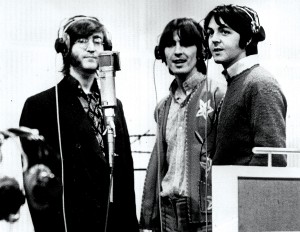 The U 47 was the first microphone with a switchable pick-up pattern. By manipulating the polarization voltage on the rear diaphragm the mic can achieve either a âcardiodâ or an âomniâ pattern. A nearly identical microphone was also made, the U 48, whose only difference was a different method of diaphragm switching which allowed for âcardiodâ and âfigure-8â³. The U 48 can be seen in numerous photographs of John Lennon and Paul McCartney singing together on early Beatles recording sessions. Rumor has it that EMIâs Abbey Road Studios even sent some of their U 47s back to Neumann to be modified into this configuration. Far fewer of these mics were sold, and considering how rare U 47s are, U 48s are even harder to find. – See more at: http://morrisound.com/2012/11/16/neumann-u-47/#sthash.rGU9PYCQ.dpuf